Travelling on Croatia’s wild side since 1998

My love affair with Croatia stretches back well over 20 years. After first travelling to Croatia in the late 1990s (a winter trip to the snowbound Velebit mountains), I returned to live in Zagreb for two years, learned to speak Croatian – and have been visiting, writing about and photographing this exquisitely beautiful and endlessly fascinating corner of Europe ever since. As a travel writer I still spend several weeks of each year in Croatia, often based in Zagreb or a small village near Zadar – however I have never lost the excitement of going back, or run out of places to explore. Over the years I have travelled the length and breadth of the country, from the agricultural plains of Slavonia to the hilltowns of Istria, and from the karst badlands and lush forests of the Dinaric Alps to the glittering islands of the Croatian Adriatic.

As a travel writer I have written or contributed to half a dozen books on Croatia, including guides for Bradt, Cicerone and National Geographic Traveller, and written scores of articles about Croatia for the likes of BBC Travel, b.Inspired (Brussels Airlines inflight), CNN Traveller, Evening Standard, Hidden Europe, loveEXPLORING, Moments (P&O Ferries), Morning Calm (Korean Airlines inflight), N by Norwegian, The National, Oryx (Qatar Airways), Outdoor Enthusiast, The Telegraph, Woman’s Own and more – from a journey in search of the descendents of 16th century pirates, to interviewing rock stars in Rijeka, and photographing gingerbread makers and traditional wooden toy makers in Zagorje. 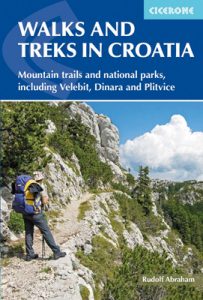 Walks and Treks in Croatia

This is the 3rd edition of my guide (originally published back in 2004) describing 27 day walks and multi-day treks in all Croatia’s main hiking areas on the mainland, from the forests of Gorski kotar to the highest parts of the Dinaric Alps, and the national parks of Northern Velebit, Paklenica, Risnjak and the Unesco-listed Plitvice Lakes.

This new 2nd edition of Bradt’s Croatia: Istria, with Rijeka and the Slovenian Adriatic, which I co-authored with Thammy Evans, has been fully updated and remains the only full-length guide to the region including background and practical information. 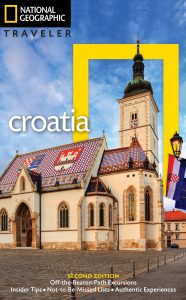 2nd edition of my Croatia guide in the National Geographic Traveler series. 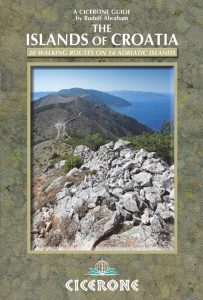 The Islands of Croatia

My hiking guidebook to 30 day walks on 14 islands on the Croatian Adriatic, including Rab, Krk, Mali Lošinj, Vis, Korčula, Hvar and Mljet, with lots of background information including wildlife and plants, history, language and ferry routes. Winner of the best guidebook award from the British Guild of Travel Writers. 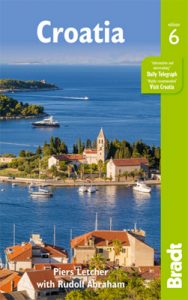 New and completely revised and updated edition of Bradt’s popular Croatia guidbook. This is the third edition of the book which I’ve worked on.

Over more than two decades I have visited and hiked in almost all of Croatia’s main (and many lesser known) mountain regions, national parks and nature parks, including Risnjak and Velika kapela in Gorski kotar, the breathtakingly beautiful Velebit mountains and Paklenica, Biokovo, the wetlands of Lonjsko polje and the Unesco-listed Plitvice Lakes. I wrote the first English language hiking guide to Croatia, have climbed Croatia’s highest mountain, Dinara, which lies on the Bosnian border and in 2021 was declared the country’s newest nature park, and I have hiked Croatia’s greatest long-distance trail, the ~100km Velebit Hiking Trail (Velebitski planinarski put) across northern, central and southern Velebit. Along with several other trails, this now forms part of the Via Dinarica (a 1,330km mega trail from Slovenia to the wilds of northern Albania). I have also hiked on many of the islands (and wrote a guidebook about island walks in Croatia), including Vis, Lastovo, Hvar, Krk, Rab and Losinj. To find out more about my work as an outdoor writer and photographer click here.

Croatia has a wealth of traditions inscribed on the Unesco list of Intangible Cultural Heritage, covering arts and crafts, dance, music, food, singing, processions and festivals across the country. In fact Croatia has one of the largest numbers of traditions (or ‘elements’ as they’re rather uninspiringly called by Unesco) inscribed on the list of any country in Europe, and certainly more than any country of a similar size – 17 to be precise, and over the years I’ve photographed and written about rather a lot of them. Croatia’s Intangible Cultural Heritage includes the Alka in Sinj, lace-making in Pag, Hvar and Lepoglava, gingerbread craftsmanship and wooden toy-making in Marija Bistrica, the Zvončari or ‘bell ringers’ of Kastav (who also make an appearance at the Rijeka Carnival), the procession of the Ljelje in Gorjani, the art of dry stone walling and more – and of course there are many other equally valuable traditions which are not inscribed on the list, such as the medieval crossbow tournament on Rab, and Croatia’s exceptionally rich tradition of folk costumes.

To see photos of Croatia’s Intangible Cultural Heritage click on the link to this image gallery.

For travel and documentary images of Croatia please head over to Rudolf Abraham Photography (opens in new tab) where you’ll find photographs from all regions of the Croatian mainland and islands – from Unesco-listed cities and architecture to landscape, hiking and national parks, food, folk costumes, Intangible Cultural Heritage, portraits, street photography and more.